This article is a stub. You can help High School DxD Wiki by expanding it.

Diabolos of the Old School Building

The Phoenix of the School Battle
Diabolos of the Old School Building is the first novel of the High School DxD series. This novel covers the first half of the Red Dragon Emperor's Awakening arc.

The same colour as that person’s hair colour—.

That’s what I thought while I was looking at my hand covered in blood.

Red— A crimson red hair which is more brilliant than strawberry-blonde.

Yes, that person’s beautiful and long crimson hair has the same colour as the colour my hand is covered in.

I, Issei Hyoudou, am a second-year high school student but I'm not her age. She went out with me! It was bound to happen but why did she kill me!? Still, doesn't this world have a God!? The most beautiful girl in the school, Rias Gremory, saved someone like me. The truth hit me that it wasn't God or Buddha, but a girl who said she was a Devil. "You have been reincarnated as a Devil. Work for my sake!" The curtain was raised, thus my life as a Devil servant who was attracted to the award of my senior's tits began. 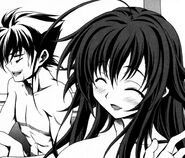