The Hyoudou Residence is the home of Issei Hyoudou and his parents. It would later become a base of operations for the allied factions in Volume 5, following the appearance of the Khaos Brigade.

After its renovation, it also became the home for almost all the current and former female members of the Occult Research Club, the female members of the Vali Team: Kuroka and Le Fay Pendragon, the Princess of the Kyoto Youkai: Kunou, envoy of the Camilla faction: Elmenhilde Karnstein, the angel Lint Sellzen and the Dragon God: Ophis, and her spawn: Lilith.

The Hyoudou Residence was originally a normal two-story terrace house with a light blue exterior, a balcony on the second floor, and a brown roof. It would later be renovated by the Gremory Clan in Volume 5 of the light novels into a large, six-story house with three large basements.

All floors in the renovated house are accessible via an elevator. There appear to be hidden rooms in the residence due to the designer of the house having a fondness for hidden rooms. Two of such are located in a corner that leads to a dead end on the first basement floor and at the corner of the bath. The other hidden rooms have yet to be discovered.

Before the renovation, Issei's room was 8 tatami-mats wide. After the renovation, it was stated to be twice as large with it containing a new model flats-screen TV and the latest kinds of game consoles.

A small shrine erected on the rooftop of the Hyoudou mansion for Ophis, the "Dragon God," after Chapter 3. A 400-year-old cedar tree that had been broken by a natural disaster was used as the building material, and with the help of Kunou and others, it took two days for the Gremory family to build it. Instead of komainu (lion-dogs), statues of the Two Heavenly Dragons were placed, and the money placed in the money box is used as pocket money for Ophis. The divine power is not generated so much because the divine rituals are simplified so as not to adversely affect devils, but lightning strikes in protest from Heaven when impure wishes are made, as seen when it struck Azazel for making malicious wishes and Issei for making disreputable wishes.

The Hyoudou Residence (pre-renovation), as shown in the anime 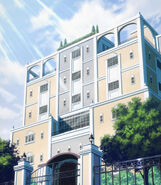 The Hyoudou Residence (post-renovation), as shown in the anime