The Watchers of the Children of God

For more details on the Grigori, refer to this page.

Grigori is an organization created by Azazel and the Cadre Fallen Angels who fell from the grace of God of the Bible in Heaven after they gave in to their impure thoughts.

Originally from the Fifth Heaven, the Grigori were once Pure Angels that was created by the God of the Bible until they fell from Heaven for giving into their impure thoughts and having sex with Human women. Azazel and the Grigori participated in the Great War against God and the Angels in Heaven and the original Four Great Satans and the Devils, but after God and the Satans were killed, the Grigori became the first to retreat after losing many of their subordinates and one Cadre Kokabiel wanted to continue the war until he was held back by the other Cadres.

After the Great War, the Grigori went into hiding in the Human world and began researching Sacred Gears and creating Artificial Sacred Gears, while also taking in possessors of Sacred Gears that have no family and are left alone, such as Tobio Ikuse and Vali Lucifer. However the Grigori had a strict policy of not causing harm to the Human world and set on eliminating those Sacred Gear users who may cause harm to the world and trying to avoid future threats, such as Issei Hyoudou, who is the possessor of the Longinus; Boosted Gear, due to the fact that a talentless user of a powerful Sacred Gear could cause great damage to the world, at least until he was revived as a Devil by Rias Gremory.

Kokabiel eventually went rogue and began stealing three of the seven Excaliburs from the Church with the help of Freed Sellzen and Valper Galilei in order to start another Great War, but his efforts was stopped by Vali, who was sent by Azazel to stop his rampage.

After the Demonic Beast Riot, Azazel stepped down as the Governor General and became a supervisor of Kuoh Town, as Shemhazai was promoted the next Governor General, while Baraqiel became the Vice Governor General. Azazel also reveals that Grigori lost more of its members to the Khaos Brigade after a group of top-class Fallen Angels had been discovered to be giving out information to them. Due to losing more of it's top-brass members and the decreasing rate of natural-born Fallen Angels, Azazel says that Grigori might meet its end soon.

During the Evil Dragon War, Azazel is sealed together with three of Four Great Satans and Four Great Seraphs, as well as the major Gods from every mythologies to fight and contain Trihexa. 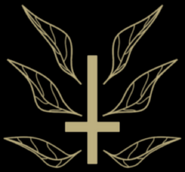