The Glasya-Labolas Clan is one of the remaining 32 Devil Clans of the 72 Pillars.

The Glasya-Labolas Clan house produced Falbium Asmodeus, the current "Asmodeus". Zephyrdor Glasya-Labolas became its current heir after the previous one that was meant to succeed it was mysteriously murdered, it was revealed that Diodora Astaroth was the one who committed the crime.

However, after Zephyrdor became useless due to being defeated in the Youth Devil Rating Game Tournament against Sairaorg Bael leaving him in an emotional state, another member from the main branch, Iryuka Glasya-Labolas was later named the current heiress.

Glasya-Labolas' clan symbol appears to be an irregular symbol, almost looking like a person with wings. 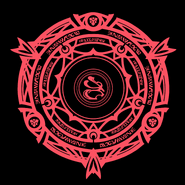