Latia Astaroth (Current Heir)
The Astaroth Clan is one of the remaining 32 Devil clans of the 72 Pillars and holds the rank of Duke.

The house that produced the current "Beelzebub", it was one of the highest-ranking families among the 72 Pillars until the events of Volume 6. The next heir was supposed to be Diodora Astaroth, but he betrayed his family and the Devils and sided with Khaos Brigade and was later killed by Shalba Beelzebub.

Due to Diodora Astaroth's actions of siding with the Khaos Brigade, the House of Astaroth lost many of their privileges.

Prior to Diodora's betrayal, Astaroth territory also had the most popular institute for taking the promotion test for Low-Class Devils to rise up to Middle-Class. They also had good ties with the House of Vassago, however, the current relationship between the two is unknown.

A stadium built in the Astaroth's territory to commemorate Ajuka for the Azazel Cup. It is a stadium with a very modern design and used some unknown technology. The corridors are equipped with automatic cleaning robots and it has many kinds of facilities. The waiting rooms are very spacious, with no problems for human-like beings entering, or giant-like beings.

The clan symbol of the Astaroth resembles a capital "A" with a curved trail like design and is green in color.

Diodora Astaroth, the former Heir of the Astaroth Clan

Latia Astaroth, the current Heir of the Astaroth Clan 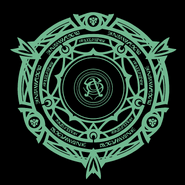 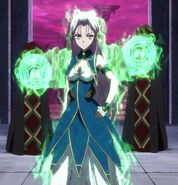 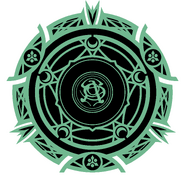 Retrieved from "https://highschooldxd.fandom.com/wiki/Astaroth?oldid=225971"
Community content is available under CC-BY-SA unless otherwise noted.